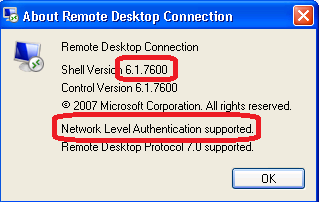 We’ve just setup a Windows Server 2012 with Exchange 2013 and Remote Desktop Session Host services and ran in to an issue where XP clients (or machines without RDP 8 Update) can’t remote desktop in to the server with the following:

“An error occurred while sending data to the Remote Desktop Gateway server. The server is temporarily unavailable or a network connection is down. Try again later, or contact your network administrator for assistance.”

We tested a Windows 7 computer and it worked fine, so we tested another Windows XP and ran in to the same issue, we researched a fair amount and came across a couple of promising articles, so we made sure the XP client had the latest Remote Desktop Connection:

Then we made sure it support NLA: However we were still getting the same issue, I compared this to another Windows Server 2012 Remote Desktop Session Host server setup and the settings looked right, but this server didn’t have Exchange 2013 installed.

Exchange 2013 moves the RpcWithCert application to the ‘Exchange Back End’ site which doesn’t have the 443 binding:

As reference in the previous article this affects XP as it relies on RPC over HTTP as per the table in:

Windows 7 with the RDP 8 update can use HTTP and will happily work with this setup, even though Remote Desktop Gateway moans about the certificate, but because XP uses RPC over HTTP it wont work, ever.